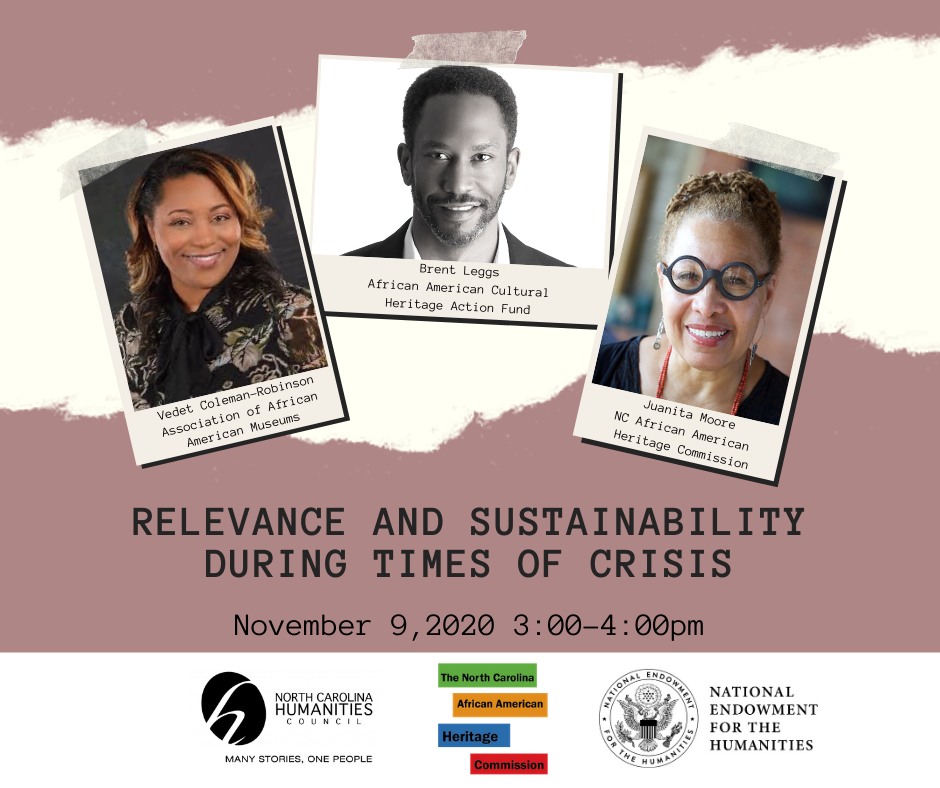 This  webinar is the third installment of a six-part Zoom webinar series designed to offer guidance and strategies around how to sustain our institutions in this moment.  The series will leverage the expertise of sixteen heritage practitioners from across the country to address numerous topics.

2020 has been an unprecedented year.  In many ways, our country has stood in the face of two pandemics: COVID-19 and the continuation of systemic racism plaguing our country.  What are the challenges facing African America cultural institutions?  How can cultural institutions build cases for relevancy within their communities?  This webinar invites three leaders from the field to consider and discuss sustainability, relevance, and how to navigate African American heritage preservation work.

Vedet Coleman-Robinson is the Executive Director of the Association of African American Museums. Coleman-Robinson comes to AAAM from the National Park Service (NPS) where she served for eleven years as a Grants Management Specialist within the State, Tribal, Local, Plans & Grants Division (STLPG). During her time at the NPS, Vedet was the Program Lead for the Historically Black Colleges and Universities Grant (HBCU) and the Underrepresented Community Grant programs for STLPG.  She has devoted herself to helping bring voice to communities that lacked representation in the fabric, space and time of American history, and was the subject-matter expert in the STLPG Division on the policies and procedures of museums who were awarded grants. She also served in leadership roles within the National Park Service’s Employee Resource Groups to help foster and promote relationships and visibility of employees and sites that are underrepresented within the National Park Service and was often called upon for historic research studies that pertained to African American history and culture.

Brent Leggs leads the African American Cultural Heritage Action Fund, a $25 million fundraising and preservation initiative to help preserve 150 sites of Black activism, achievement, and community. Envisioned as a social movement for justice, equity, and reconciliation, the Action Fund is promoting the role of cultural preservation in telling the nation’s full history, while also empowering activists, entrepreneurs, artists, and civic leaders to advocate on behalf of African American historic places.

During his 15-year career, he has led national campaigns to honor the American Civil Rights Movement, women’s history, arts and culture, and more. His expertise is strategic and master planning, social and ethnic issues, fundraising, partnership development, and branding. Brent has taught at Harvard University, Boston Architectural College and the University of Maryland. He is a Senior Advisor and Adjunct Associate Professor at the University of Pennsylvania’s Center for the Preservation of Civil Rights Sites (CPCRS) and is an Adjunct Professor at Columbia University’s graduate program in Historic Preservation.

Juanita Moore is a 40-year museum professional with experience as a curator, educator, administrator and a museum planner with three national museums.  She has been a results-oriented strategic leader as President/CEO of the Charles Wright Museum, Executive Director of the American Jazz Museum, and Founding Director of the National Civil Rights Museum. Most recently Moore served as President/CEO of the Charles Wright Museum in Detroit, Michigan. As an entrepreneurial leader, Moore led The Wright, a city museum, through Detroit’s toughest economic depression.

During this time The Wright more than doubled its programs and community partnerships, increased membership, attendance and launched a successful annual fundraiser.  The fundraiser, The Wright Gala, became a premier city event and in the fifth year alone raised 1.7 million dollars. Moore has served on numerous boards, including:  The African American Museums Association, American Alliance of Museums, The American Association of State and Local History, and ICOM-US.  She currently serves as a commissioner with the NC African American Heritage Commission.

Webinar registration is now CLOSED. A recording will be available following its completion.